I’ll be using LipSurf during Wanikani reviews or lessons, and it will suddenly stop recognizing any commands, either Wanikani input or help, normal mode, etc. Sometimes if I deactivate the plug in and reactivate it will start working again, only to stop later, but sometimes deactivating doesn’t help, and I have to restart Chrome. Restarting Windows did not help, the problem occurred in the next session.

I thought this might have something to do with my own plugins that I was working on somehow messing things up, so I didn’t report it until I was sure, but I was able to reproduce this today on two other computers, a different windows PC and a Mac, neither of which I have installed my own plugins on.

Unfortunately there are no errors in the developer console. I don’t really use LipSurf outside of Wanikani so I’m not sure if it will happen during general browsing, however when it does stop working, it’s across multiple tabs, and if I manually navigate to another tab, I can’t use LipSurf there either

Well of course now that I posted, I can’t reproduce it any more

OK that narrows it down - not having custom shortcuts. The other thing worth checking is if your internet is indeed working. Just a quick check on fast.com to make sure you’re connected is all you need. I’m leaning towards this being an issue with LipSurf getting stuck on a bad transcript though. When you check CPU usage, please make sure to also check the Chrome task manager.

This is still periodically a problem. I’ve kept an eye on the Chrome task manager when it does happen and I don’t see anything that looks like spikes although I’m not familiar with this tool. I see the LipSurf extension CPU fluctuate around single digits, although there was one time today where I saw it go up to double digits, see below.

Your theory is probably correct that there’s something going on performance-related. I noticed that sometimes if I simply wait LipSurf will start working again. This morning while I was using my laptop I could barely get through a few WK review items before it would hang up, but then I decided to try plugging my laptop in and I was able to get through 40 items before it happened again. I happened to recently see a noticeable improvement in JavaScript performance in a different website with this laptop plugged in which made me think it’s related… This is a Surface Book 3 which due to the detachable screen does not have the most beefy CPU in the world. It does still happen occasionally on my desktop which has an i7-7700k though, and I was using this laptop all summer for Wanikani without issue… And since I was able to reproduce it on my work MacBook Pro it seems like a software issue… just some extra data points.

Another issue I’ve seen happen is LipSurf gets stuck on the wrong language in WK reviews, even though the UI appears to be in the right language, I took a couple of screenshots to show what this looks like, you can see I’m saying trying to say the English but it’s being interpreted as Japanese: 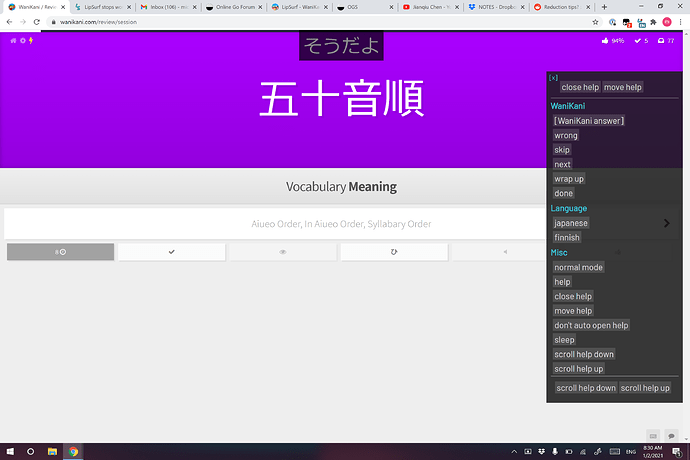 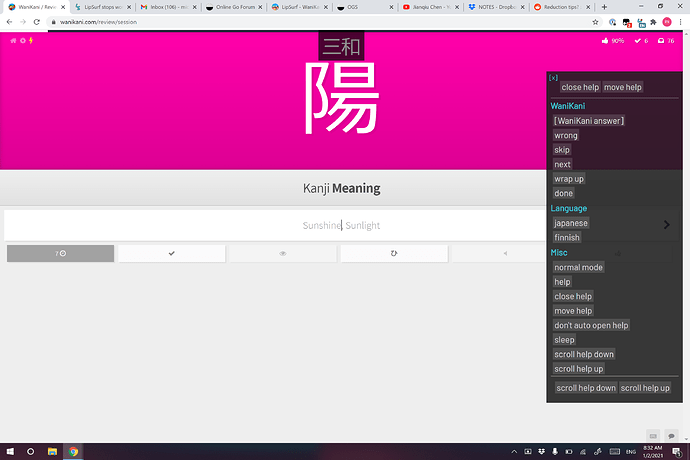 The reason I think this might be related is that when this happened I saw LipSurf hovering between 15-20 the task manager, and after I waited a while, it would start accepting the correct language. Interestingly turning lip surf on and off didn’t actually fix it, the language looks like it’s set to the correct one for the current card but it was still misinterpreting

Anyway I hope this is useful

edit: oh and my internet is definitely still working when this happens

Thank you @michiakig this is definitely useful. I have had a couple other reports, we’re looking into it.

I’ve had both the dictation periodically stop working in the past, as well as it getting stuck in the wrong language.

Oddly, the first problem seemed to go away when I switched from my wired 3.5mm headset to my Bluetooth one. The wired headset works fine for everything else though, so I know it’s not just a headset problem, exactly. Not sure what I’d make of that data point if I were a developer on LipSurf but here we are!

If it ever goes to the wrong language, you can always say “えいご” to switch to English or “Japanese” to switch to Japanese. In WaniKani modes those commands are enabled by default. If you want to use them in normal mode you would need to enable those commands (under the LipSurf plugin in the options)

I forgot to mention, when I get into this state, where the live transcribe is showing English and the LipSurf UI is still in Japanese, the “Japanese” and “えいご” commands do not seem to work. They usually work, but not when my LipSurf plugin gets into this state.

I think what’s happening is that LipSurf is expecting Japanese (or English) commands and the voice recognition engine is somehow switched to the other language, making it impossible to issue working commands to LipSurf.

The language switching problem has unfortunately become so frequent on my machine that it renders LipSurf for WaniKani basically unusable. Going to do an uninstall/install to check if that fixes it somehow.

Update: Had it happen again on my very first review session after reinstalling LipSurf.

, the “Japanese” and “えいご” commands do not seem to work. They usually work, but not when my LipSurf plugin gets into this state.

fwiw this is the behavior I see also

Thanks for the reports!

Thanks for your reports. I have fixed the issue, could you let me know if it works better for you in this beta version?

Here are the instructions for installing a custom version:
https://help.lipsurf.com/update-lipsurf.html#install-a-beta-custom-or-enterprise-version

If it’s better I’ll upload this as an automatic upgrade for everyone.

I just installed the beta, and it’s working fine for me, but I was not really able to 100% reliably reproduce the original problem (just before installing the beta I did a bunch of reviews without any issue, whereas this morning I hit the snag once before plugging my laptop in)

@michiakig @ThunderWeasel and anyone else who has installed the beta. Thanks for trying it!

Make sure to uninstall it at your earliest convenience, and reinstall from the Chrome webstore to continue using the mainline version of LipSurf and to get the auto updates.

So I’ve been using the latest for a while and it does fix the original issue with one exception: if you allow Lipsurf to go to sleep during a WK review with a card expecting Japanese on the screen, and then wake LS up, it gets into the same bad state again, where the language is Japanese but it’s interpreted as English. Refreshing the page fixes it (just turning LS off and on does not)